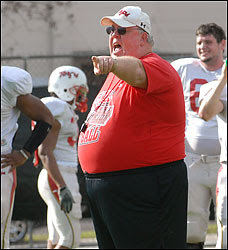 To make jokes would be juvenile, and just way too easy. But sweet mother of pearl, it's been a hard 24 years for Ralph. The man was fairly buff and athletic back in '83 (and gloriously mustachioed as well), while today he's just....very, very, very not buff and athletic (but thankfully clean-shaven). And let's keep in mind that Fridge has looked like his "Now" picture for over 10 years, so his change in appearance really happened over about a 10-15 year span.

Fascinating, but troubling.
Posted by Marcus at 6:41 PM

Labels: Now and Then, Ralph Friedgen

Here's a really good (imo) ACC preview you might want to link to.

Jesus H Christ man, what the hell happened to the Fridge! Actually I have a theory: the football offices for GT are just two blocks from The Varsity, and you can gain five pounds just walking into that place. Poor fat bastard.

He used to look just like Taggart from Beverly Hills Cop!